"Borders, Migration and Detention in the Americas" Course

Call For Volunteers: Help Seniors and Other Vulnerable Members of the Community

Call For Volunteers: Help Seniors and Other Vulnerable Members of the Community 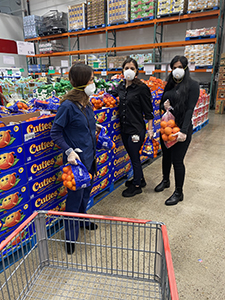 My name is Milano Sliwa, and I am proud to say that I am a student at San Diego State University studying Political Science. My sister, Monica Sliwa (a second-year Doctor of Pharmacy student at UC Skaggs School of Pharmacy and Pharmaceutical Sciences), and I wanted to help the vulnerable members of our community during this difficult time.

Monica and I decided to start a community service outreach, with the help of Afrooz Sabouri, Monica's classmate. Our outreach aims to provide free grocery shopping and delivery services to individuals (especially those 60+yrs) who are at high risk of contracting COVID-19 virus in the San Diego area.

To ensure the safety of the volunteer and our patient, we closely follow required guidelines. For instance, we are required to use masks and gloves (which are provided to volunteers) while shopping and delivering. We wash/sanitize our hands frequently and avoid touching our face at all times. We also practice social distancing and keep a 6 feet distance between anyone we interact with. For more information regarding our guidelines, please email us at [email protected]. 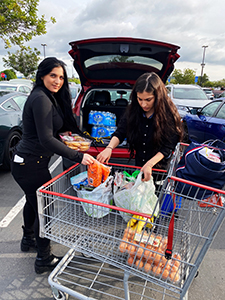 Our mission is to help those in the community who are struggling with obtaining groceries and other essentials, particularly those who speak languages other than English. Our volunteers speak Arabic, Assyrian and Chaldean Neo-Aramaic, Spanish, Farsi, and French, in addition to English.

To volunteer, please fill out our form.

Stories of Migration to be Spotlighted on World Refugee Day

Stories of Migration to be Spotlighted on World Refugee Day

Students Participate in a Binational Research Class in Tijuana

Students Participate in a Binational Research Class in Tijuana 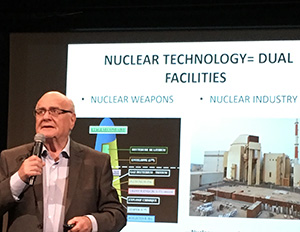 During a symposium on nuclear technology and policy in France last month, I had the opportunity to speak with Dr. Abraham Behar, Past Co-President of the International Physicians for the Prevention of Nuclear War (IPPNW), an organization that was awarded the Nobel Peace Prize in 1985 and 2017.  I asked Dr. Behar, who lives in France, about the organization and the link between its work on human rights.

GC:  What is the IPPNW and how did it come into being?

Dr. Behar:  International Physicians for the Prevention of Nuclear War (IPPNW) is a non-partisan federation of national medical organizations in 62 countries, representing tens of thousands of doctors, medical students, other health workers, and concerned citizens who share the common goal of creating a more peaceful and secure world freed from the threat of nuclear annihilation.

IPPNW was founded in 1980 by physicians from the United States and the former Soviet Union who shared a common commitment to the prevention of nuclear war between their two countries. Citing the first principle of the medical profession — that doctors have an obligation to prevent what they cannot treat — a global federation of physician experts came together to explain the medical and scientific facts about nuclear war to policy makers and to the public, and to advocate for the elimination of nuclear weapons from the world’s arsenals.

GC:  IPPNW received the Nobel Peace Prize in 1985  for its work to provide substantive information and awareness about the catastrophic consequences of nuclear war.  It seemed hopeful then, with the Cold War winding down, that the world would see an end to the nuclear arms race.

Dr. Behar:  Although the Cold War ended with the collapse of the Soviet Union in 1991, the US and Russia retained thousands of nuclear weapons ready to launch at a moment’s notice. Proliferation and the threat of nuclear terrorism have added to the nuclear danger in the post-Cold-War world. In recent years we have learned that even a limited, regional nuclear war using a fraction of the world’s nuclear weapons would cause irremediable harm to the Earth’s ecosystems and could result in the starvation of as many as two billion people in a “nuclear famine.”

GC:  Some have pointed out, however, that most wars are not fought with nuclear weapons.

Dr. Behar:  We recognize that the catastrophic health and environmental consequences of a nuclear war are at the extreme end of a continuum of armed violence that undermines health and security. IPPNW is committed to ending war and to addressing the causes of armed conflict from a public health perspective.

The 1990s global campaign to ban landmines marked IPPNW’s first major entry into the non-nuclear arena. The federation became engaged in addressing small arms violence in 2001 when we launched Aiming for Prevention, which has broadened to include all types of armed violence. Aiming for Prevention has been driven by IPPNW affiliates from the global South—primarily Sub-Saharan Africa, Latin America, and South Asia—who live and work in areas where armed violence is a constant threat and consumes significant portions of health care budgets.

In 2013, IPPNW participated in the successful campaign to adopt the Arms Trade Treaty. As part of Aiming for Prevention, IPPNW is also an active participant in the World Health Organization’s Violence Prevention Alliance.

Dr. Behar:  ICAN — the International Campaign to Abolish Nuclear Weapons — was launched/co-founded by IPPNW in 2007 and received the Nobel Peace Prize in 2017 for its role in achieving a treaty to ban and delegitimize nuclear weapons, leading to the global elimination of these most destructive of all weapons.  This was the Treaty on the Prohibition of Nuclear Weapons (TPNW).  The treaty was adopted by the United Nations last year by a vote of 122-1-1, meaning that a majority of nations have demanded the total abolition of nuclear weapons.

GC:  Last month (October 2018), the United States withdrew from the 1987 Treaty on Intermediate-Range Nuclear Forces (INF).  What is IPPNW’s reaction to this?

Dr. Behar:  IPPNW board chair, Dr. Bjorn Hilt of Norway has stated:  “It is very disturbing that yet another hard-won achievement to restrain nuclear arms deployments—a treaty that marked the beginning of the end of the Cold War and for which IPPNW campaigned throughout the 1980s—may be tossed aside by President Trump at the same time that the US is officially leaving the Iran nuclear deal.”

The big loser in the new East-West confrontation could be Europe.  Before the conclusion of the INF treaty 30 years ago, there was an uncontrolled arms race between the major powers.  If nuclear war had broken out, either by intention or accident, it likely would have begun in Europe and would have obliterated the nations in its front lines.  The signing of the historic INF Treaty in 1987 by President Reagan and Secretary Gorbachev relieved some of the immediate danger.  Its impending demise threatens a relapse into a new Cold War, with Europe again at ground zero.

Dr. Alex Rosen, chairman of IPPNW Germany, has said:  “Both the US and Russia own a share of the blame for this situation, with each accusing the other of breaking the treaty.  The recent modernizations of the nuclear arsenals on both sides, especially the development of medium-range cruise missiles, but also the establishment of a missile defense system by the United States in Romania and Poland and the Russian deployment of short-range missiles in Kaliningrad clearly contradict the spirit of the INF agreement. It is time to settle these questions at the negotiating table.”

GC:  Is there a possibility for returning to the negotiating table?

Dr. Behar:  Both President Putin and President Trump expressed desire at different points in their careers to negotiate the total abolition of nuclear weapons.  Citing this, IPPNW called upon the two leaders to begin a wider discussion of their nuclear arsenals, rather than ending an iconic nuclear weapons limitation treaty.

Referring to the support for the TPNW by the majority of UN member-states, IPPNW co-President Dr. Ira Helfand urged: “These nations and the people of the world are sending a clear signal to the nuclear weapons states to pay heed to their obligation to completely disarm under the 50-year old Nuclear Non-Proliferation Treaty (NPT).  The ‘Back from the Brink’ Campaign  in the US outlines steps that could be taken by Congress and the US President, if they wish to be true leaders in avoiding nuclear war.  This should not be a partisan issue.  As President Reagan famously said, ‘nuclear war cannot be won and must never be fought.’  At a time when we desperately need steps forward toward disarmament, withdrawing from the INF treaty would be major step backward.”

[Note:  The US, Russia, China, the UK, and France all refuse to support the TPNW.]

GC:  On the topic of nuclear energy, during its meeting last November the UN General Assembly spoke in strong support of promoting nuclear power as solution for “green growth.”  Do you think that nuclear power can be harnessed for such peaceful purposes to promote sustainable development?

Dr. Behar:  Nuclear power is not a good investment and the true and long-term costs and effects of nuclear power far outweigh its potential short-term benefits. IPPNW in Europe has identified the detrimental effects of uranium mining and nuclear waste on the environment an on public health and listed the most relevant studies on the effects of uranium mining and civil nuclear energy on childhood leukaemia, lung cancer and other radiation-related diseases. We explained the underestimated risks of nuclear catastrophes and talked about the nuclear legacy that we are leaving to future generations. We also cited studies showing that nuclear energy is in fact irrelevant when it comes to the reduction of greenhouse gas emissions or alleviating climate change.

The inextricable links between nuclear power and nuclear weapons, brought to light in the common interests between the civil nuclear industry and the British Trident nuclear submarine program recently was also discussed, as were the attempts of the nuclear lobby to create fake citizen groups and NGO's in order to green wash its business model.

We presented an outlook to what could be described as a real energy revolution: modern energy conservation and efficiency methods, combined with 100% renewable energy generation, feeding flexible, distributed, community-based smart grid systems that would offer energy autonomy and independence of fossil and nuclear fuel imports.

Human rights and democracy are linked: Both are in the opposite of nuclear industry management; because security and safety in this production must have secret, hard organisation and unit command. Therefore, in the future, in accordance with democracy and human rights, we need a kind of energy under popular control.

GC:  You mention human rights.  What is its connection to the effort to eliminate the nuclear threat?

Dr. Behar:  If prevention is the only way to eliminate nuclear threat, peace and human rights must be major’s goals. It is necessary to learn about non-violent management for any conflicts, to understand step-by-step democratic change for our behaviour. Finally, the first, the best human right is SURVIVAL. In this issue, the first condition is to build a nuclear free world. Please, make our planet great again.